The Golden Age of Christmas

It’s officially the party season and we’re all looking forward to celebrating with family and friends, as well as sitting down to a splendid feast that is rooted in tradition. Many of these traditions originated in the Tudor and Elizabethan eras, and it is from here we take inspiration for our latest blog.

Middle Temple is a magical place at Christmas. The towering splendour of our magnificent Elizabethan Hall, with its fabulous tree, decorations and festive atmosphere, can immediately transport you back to the Golden Age of Elizabeth I.

The Elizabethan’s were heralded for their celebrations and feasts, climaxing with Twelfth Night. This date marked the end of a winter festival that started on All Hallows Eve, with the Lord of Misrule turning the world upside down. On this day, the Queen and the upper-classes would become the peasants, and vice versa, with the normal order of things reversed – a theme that runs throughout one of Shakespeare’s best-known plays where many elements are reversed – Twelfth Night.

The Inn’s links with William Shakespeare are well-known, and it is said that the first performance of Twelfth Night was played in the Hall in 1602, with Elizabeth and the Bard himself in attendance. This play is forever associated with a day that, in Shakespeare’s time, was the climax of the festive season.

The Queen typically spent Christmas in Whitehall, where the festivities were especially extravagant. Hundreds of guests would take part in two week-long courtly celebrations, which included splendid feasts and unrivalled entertainment – best illustrated by the old adage ‘eat, drink and be merry’!

Many of today’s festive food traditions originated in this era, but thankfully they have now evolved into something infinitely more palatable!

The most significant addition to the Christmas table during Elizabeth’s reign was plum pottage, first recorded in 1573. Related to the later plum pudding, which in turn would become Christmas pudding, it was a mixture of meat, spices, and oatmeal cooked in the gut of the wild boar! We’ll pass on that one!

Turkey was first introduced to Europe from the Americas during Henry VIII's reign, and gradually rose in popularity as a Christmas dish given that it was cheap and quick to fatten. For the aristocracy, goose was the most traditional meat eaten on Christmas Day. 1588 Elizabeth I ordered the entire country to serve goose at their Christmas feast, since it was the first meal she had eaten following England's victory over the Spanish Armada.

Wealthy noblemen of the day would put on magnificent banquets featuring dramatic centre-pieces of roasted swans or peacocks. These were accompanied by exotic fruits and vegetables from the New World. Aristocratic tables during an Elizabethan Christmas would have been laden with delicacies, such as tomatoes, potatoes, red peppers and pineapples. Expensive foods such as citrus fruit, quinces, melons and apricots would also have been imported from Southern Europe for the occasion.

But whilst the wealthy dined in style, the servants would have eaten 'humble pie'. A mixture of choice cuts from a deer, including its intestines, kidneys, heart, liver and brain. It was boiled into a stew, along with suet, currants, and apples, and finished off with sugar, spices and salt. That doesn’t sound too appealing either!

One thing that hasn’t changed in the last 500 years is drinking – a major part of Christmas festivities. Beer was the staple drink for the majority of people at all levels of society, and it was common for country homes to house their own brewery. Mulled wine was as popular then as it is now, and the Elizabethan’s also enjoyed Syllabub - hot milk flavoured with wine or rum and spices - and ‘lambswool’ – a blended drink of hot cider or ale with spices and apples, heated until it formed a wooly head.

The showstopper was marchpane, or marzipan, made from almond paste and sugar. It was sometimes moulded into three-dimensional shapes and iced to resemble fruits. Other favourites included gingerbread, quince marmalade, candied or gilded fruits, and sugar-plate.

The Elizabethans gave us many Christmas traditions that we still hold dear today…and a few foodie ones that we’d like to forget!  Perhaps the most important of those was declaring Christmas Day a public holiday. 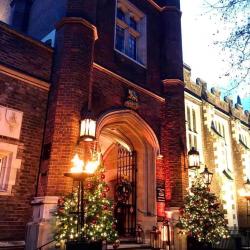