A night at the movies

Everyone loves a great film, so why not hold your next event at a location redolent of the movies? From Goldfinger’s favourite golfing resort to the Highlander’s Isle of Skye, there’s an events venue that will tempt the most discerning, movie-loving clients.

With its beautiful countryside and thrilling cityscapes, Britain is a favourite with film directors. You, too, can make like a location scout and choose an intriguing destination for your event. The promise of a great backdrop will tempt guests to attend as much as the prospect of a great meal!

Bletchley Park near Milton Keynes, once the home of the World War Two Codebreakers, is a fascinating place.  The Park and its tremendous story have featured regularly in film and television over the past few years. From the BBC’s ‘Antiques’ Roadshow’ to ‘Operation Mincemeat, the Timewatch Special’, ‘Codebreakers: Bletchley Park’s Lost Heroes’ and of course, the blockbuster film ‘The Imitation Game’, starring Benedict Cumberbatch, were filmed on location at Bletchley Park.

How about entertaining guests in one of the highest skyscrapers in Europe, The Shard? The spectacular 309.6m, 1,016ft edifice, designed by architect Renzo Piano, is starting to attract movie directors with its undoubtable charisma. In the latest Spider-Man film, ‘Far from Home’, Tower Bridge and The Tower of London feature as well as The Shard in the big final battle.

In the shadow of The Shard is Borough Market, London’s oldest and most renowned food market and location for numerous films, including ‘Bridget Jones’ Diary’ and ‘Lock, Stock and Two Smoking Barrels’. It’s not just the sheer quality of the food on offer that makes Borough Market special – though you could spend all day grazing on the delicious offerings. With architecture ranging from the Victorian, to Art Deco, to the modern day it’s also about the place and its atmosphere.

Right in the heart of London, between Fleet Street and The Strand and overlooking the Thames, is one of the four ancient Inns of Court, Middle Temple. Built between 1562 and 1573, the main buildings have remained virtually unchanged to this day, with many original features surviving the Great Fire of London and both World Wars.

A unique and spectacular setting for corporate events, Middle Temple’s superb, detailed architecture, impressive oak panelling and beautiful stained glass create a majestic atmosphere that many film makers have capitalised on. Productions filmed at Middle Temple include ‘The Wolfman’, ‘Poirot’,  ‘Bridget Jones II – The Edge of Reason’, ‘The Good Shepherd’, ‘The Da Vinci Code’, ‘Shakespeare in Love’, ‘Elizabeth’, and the BBC productions of ‘Cambridge Spies’, ‘Chambers’, ‘Crime and Punishment’ and ‘The Gentleman Thief’. When your clients dine here, echoes ancient and modern will accompany their meals!

West of London, in Buckinghamshire, is 18th century Stoke Park, one of the film industry’s favourite locations. It has always had a close relationship to Pinewood Studios four miles away and the British film industry. Two James Bond movies, ‘Goldfinger’ (1964) and ‘Tomorrow Never Dies’ (1997) were filmed here, and the epic duel between James Bond (Sean Connery) and Goldfinger (Gert Frobe) is still considered to be the most famous game of golf in cinematic history. It was also the location for ‘Wimbledon’, ‘Bride & Prejudice’, Matthew Vaughn’s ‘Layer Cake’, ‘RockNRolla’ and ‘W.E.’, Madonna's 2011 film about the romance between Edward VIII and Wallis Simpson, to name a few.

In fact, Britain boasts fantastic movie-related venues from shore to shore. Its impressive stately homes and estates have been the choice of location managers for films such as ‘The Living Daylights’, ‘Tomb Raider’, ‘Eyes Wide Shut’ and ‘Brideshead Revisited’. The Isle of Skye is a tiny island with movie memories at every turn. Film locations here include ‘Macbeth’ (2015) starring Michael Fassbender, Roald Dahl’s ‘The BFG’ (2016), ‘Snow White and the Huntsman’ starring Kristen Stewart (2012) and of course the magnificent ‘Highlander’ (1986) with Christopher Lambert and Sean Connery. 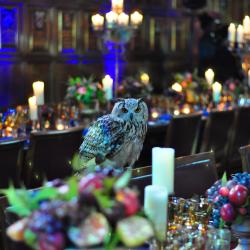